Accelerates the burn rate of all shapes and sizes of diesel molecules so more BTU’s of heat are released earlier during the power stroke instead of being wasted as soot and high EGT.

Max Mileage increases the thermal efficiency of any engine by 10% on average. 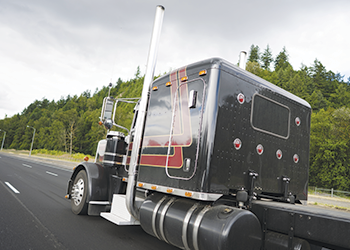 Once in the exhaust system, the catalyst continues working by burning soot at a much lower temperature, 750 degrees Fahrenheit compared to 1000 degrees (the normal ignition temperature for soot). 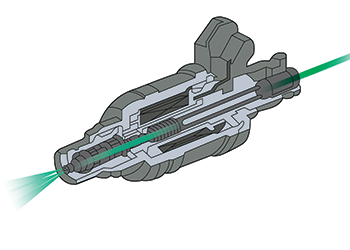 The proprietary formula is supplemented with a fuel injector cleaner that removes fuel injector coking deposits and prevents new deposits from forming. This is critical to maintaining factory-rated fuel economy by ensuring optimal fuel “atomization” and fuel injector spray patterns into the cylinder.

What Driver's Are Saying 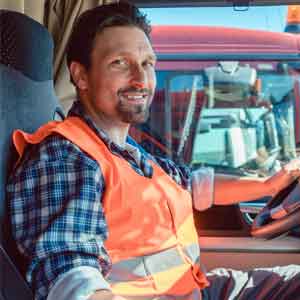 This Product Pays For Itself! 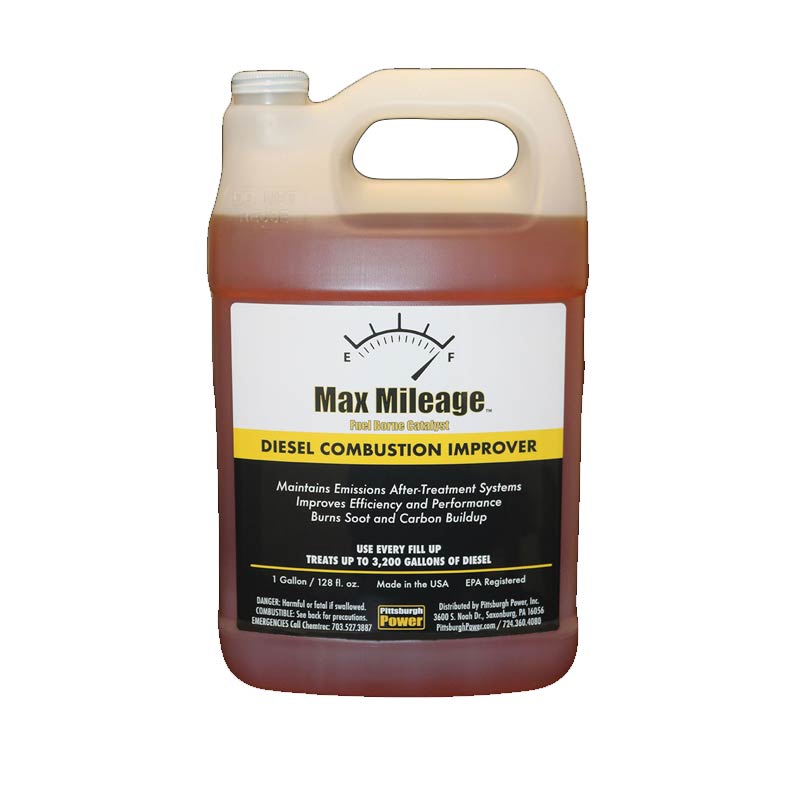 One Gallons Size Lasts One Truck, One Year. 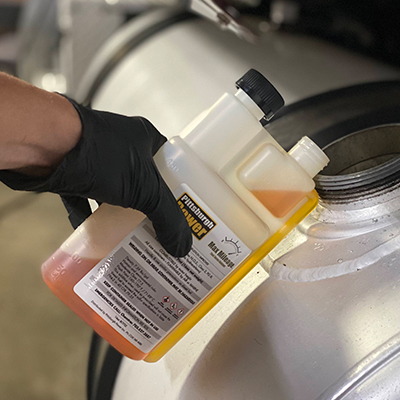 Say goodbye to soot related “check engine lights.” Stop replacing EGR coolers, EGR valves, DPFs, and maintain them with Max Mileage. If you have a 2007 and newer truck, you can keep your truck legal without sacrificing reliability.

With lower EGT, less DEF (Diesel Exhaust Fluid) is used. Yet another way the product more than pays for itself.

Less soot also means your DPF will last much longer requiring only minimal maintenance, saving you time and money.

With Max Mileage you will notice fewer regens. Wasting fuel and time on regens of all types is not productive for your business.

Results may vary, but typically after the first few weeks many notice an improvement in fuel mileage due to the more efficient combustion.

Soot is the enemy of any diesel engine. It’s abrasive and harmful to your engine’s rings and liners. Max Mileage will lower the soot levels in your oil sample.

Often the first and most noticeable change is a quieter and smoother running engine. You may also feel more power and a quicker response.

Increase the life of your turbo, manifold, and exhaust system sensors with lower EGT.

What Size Should I Buy?

If you are new to this product, the one gallons size is a great place to start. Brad Richmond, the owner of this site, is a professional driver. He drives five days a week and goes through a one gallon jug a year approximately. If you have any questions you can fill out the form at the bottom of the page.

How Often Should I Use Max Mileage?

Dose at every fuel stop. Once you’ve filled the thanks, dose out the correct amount of catalyst for each tank. Measure out one ounce per every 25 gallons of diesel fuel. Use the back of the bottle for reference. For gasoline engines, the correct dosing is one ounce for every 30 gallons of fuel, or one ml per gallon. The catalyst is designed to mix itself. That’s it!

How Do I Use This Product Safely?

Things you need to know before you begin: You’ll need a pair of gloves (nitrile, latex, or rubber) and measuring device. Be careful not to let the catalyst touch your skin. Please use one of our approved measuring devices or if you want to use your own device, it should be glass or fluorinated plastic.

Rolling dynamometer engine testing for fuel economy under controlled conditions. We are pleased to share the results:

After the baseline testing was complete, the same engine began use of diesel treated with Max Mileage FBC (fuel borne catalyst). The driver noted smoother, quieter engine operation and better pulling power (common feedback from customers). His manually logged baseline MPG was 5.2. The driver noted that fuel mileage gradually increased over the evaluation period. The driver-logged MPG from beginning to end of the 3-month test period was 5.85 MPG. This represents an increase of 13% which included the initial clean-up and conditioning time. The driver-logged MPG for the last 2 months of the test period was 5.94, an increase of 14%. These results are consistent with the dyno results obtained under controlled conditions of rpm and load.

“Return to Baseline” test and repeat: As a check on the driver reported MPG evaluation, we ran a repeat test in which the truck was driven with untreated fuel for ~30,000 miles. This “return to baseline” evaluation began in the fall of 2018 with use of “winter” fuel and lasted for approximately two months. Treatment of the fuel with Max Mileage resumed on Jan. 24, 2019, again using winter fuel, and ended on Mar. 14, 2019. Recorded numbers from the truck owner’s manual fuel log were 2,568 gallons of diesel burned over 14,289 miles driven since he resumed use of treated fuel. That adds up to an estimated fuel economy of 5.5 MPG, significantly higher than the original 4.9 MPG achieved over the previous two-month period. The increase in driver reported fuel economy for this second evaluation was 13%, consistent with previous results obtained with the rolling dynamometer (controlled conditions) and the MPG calculated manually by the owner of the engine from his fuel log.

How Much Can I Save?

=If you spend $120 per month on the fuel catalyst, you can see that it pays you. If you get an increase in fuel economy of only 2.5 %, then the cost of the fuel catalyst is covered*.*this example assumes 10,000 miles driven per month at 6 MPG and a fuel expense of $3.00 per gallon.

Is Max Mileage For Big Trucks Only?

No at all! It can be used for any diesel engine.

Can I Use This Product On Gas Engines?

Yes, but please change the ratio to 1 ounce for every 30 gallons. it has anti-knock properties so it works well for classic cars.

Is This Comparable To Other Fuel Additives?
There is no other product on the market with the same  active ingredients. No other product can come close when it comes to reducing soot and all the benefits that follow.
Will Max Mileage FBC Work For My Pre-emissions Heavy Duty Diesel Engines?

Yes, it works the same way in all diesel engines to improve combustion on average by ~10%. The main results are better fuel economy and dramatically lowered exhaust emissions as demonstrated by validated test procedures.

Can I Mix With Other Fuel Additives?

Yes, it’s safe to mix with all other fuel additives. But please do not mix it directly with other additives, instead let them mix in the tank.

Can Iron Deposits From Max Mileage Hurt My Engine?

No. The iron-containing molecules in Max Mileage FBC are fully dissolved as a liquid ingredient, similar to iron in your blood. It’s also diluted to just a few PPM so it cannot cause any damage due to frictional wear in the high pressure fuel pump and fuel injectors. Max Mileage’s EPA testing concluded there are no negative effects from long term use.

What Is This Red-Orange Residue On My DPF Filter?

Because of the absence of the oily black soot coating on the DPF it is easy to see the red-orange discoloration that results from the iron ingredient over many thousands of miles driven. This will be removed with periodic cleaning of the DPF as recommended by the engine manufacturer just like other ash (metallic) residues from other sources, including engine oil, coolant, dust and dirt, and rust contaminated fuel.

Will Max Mileage FBC Eliminate Ash Deposits In My DPF?

Max Mileage FBC is designed to reduce and/or eliminate soot deposits. Soot is the primary culprit for DPF regeneration problems as well as premature engine wear and emissions system failures in modern diesel engines. Unlike soot, ash cannot be burned off. Total ash from all sources (fuel contamination, engine oil additives, dirt and dust) only makes up a very small fraction of the incoming soot, typically less than 5%. Ash remains in the DPF as an incombustible material left behind following the DPF regeneration process and builds up over very long periods of time. Therefore, ash must be periodically removed via shop cleaning.

How Does Max Mileage FBC Decrease My DEF Usage?

Simply put, a more efficient engine will produce less NOx. Max Mileage FBC significantly increases the thermal efficiency of ANY engine, with or without emissions after treatment systems. In newer engines, the SCR system injects DEF fluid into the exhaust corresponding to the amount of NOx measured by the NOx sensor. Because the catalyst lowers NOx levels by 15% on average, the ECM responds by sending a signal to the SCR to inject less DEF, correspondingly.

Why is Max Mileage So Expensive?

At the suggested dilution, a bottle of Max Mileage will treat 3200 gallons of fuel, costing you only $.07/gallon. Besides the expensive ingredients that go into the catalyst, there is considerable research and development that went into formulating the product. Of course, the benefits you realize from using Max Mileage provide a substantial return on your investment.

A 'No-Brainer' For Fleets 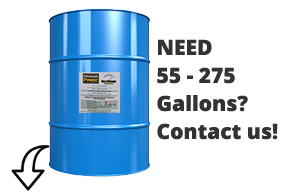 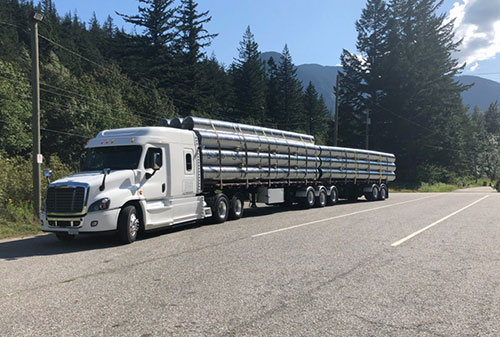 Brad Richmond enterprises is the official Canadian Distributor for Pittsburgh Power Products.  Brad is professional driver for over 20 years and uses these products daily to enhance his motor’s performance and  reduce maintenance costs.  Brad drives this 2015 Freightliner Cascadia DD16 shown above.